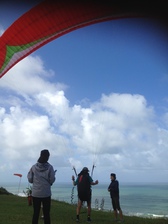 We worked with Fuel Media Japan on a promo video shoot for Sony.  We found cast and locations and managed the production from their arrival in NZ to their departure.  Can't wait to show you the results in mid to late March when the video and product have been released.

The team were over filming a new reality series Camp Rock the Tasman  We worked with them on co-ordination of their awards event and assisted with some of the production requirements.